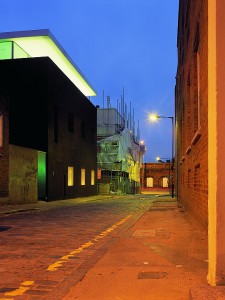 The distinctive work of architect David Adjaye (b. 1966) comprises approximately 50 built projects—from museums to libraries, private houses to social housing, urban master plans to college campuses, pavilions for artists and children’s playgrounds. His most recent commissions include the design of the National Museum of African American History and Culture in Washington, D.C., as well as the National Museum of Slavery and Freedom in Cape Coast, Ghana.

The early buildings of the Ghanaian-British architect, who studied in London at the Royal College of Art, were private commissions and often developed in collaboration with artist friends, including the homes he designed for Chris Ofili, Tim Noble and Sue Webster, Dinos Chapman, Lorna Simpson and James Casebere, amongst others.

Adjaye’s private structures play with the contrast between hermetically sealed fronts and unexpectedly generous openings in the back, thereby accommodating the owners’ need for a private retreat. In contrast, as open and permeable structures, his public buildings are socially effective architecture. Unlike structures of pure functionalism and iconic monumentality, they approach their users rather than patronizing them. Adjaye often uses materials that change color through their exposure to light, take on different textures due to varying weather conditions or provoke viewers to touch them because of their distinctive tactile qualities. They thereby also engage sensually in a dialogue with their audience.

The exhibition examines more than 30 projects through drawings, models, installations, photographs, videos, and material fragments. The survey exhibition, the most extensive of Adjaye’s career, is organized by Haus der Kunst and Art Institute of Chicago. It is curated by Okwui Enwezor, director of Haus der Kunst, Munich, and Zoë Ryan, chair and John H. Bryan Curator of Architecture and Design at the Art Institute of Chicago.